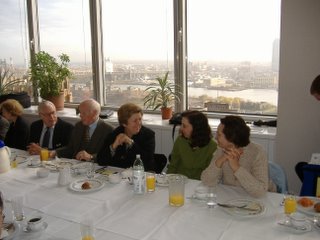 At the October 2005 meeting Rotarian Josef Klee introduced Ambassador Mirjana Mladineo, Permanent Representative to the United Nations of the Republic of Croatia (Center). Josef point out that since her appointment in July 2005, there are now 18 women Ambassadors at the UN.
Ambassador Mladineo earned advanced degrees in English and Russian Languages and Culture, from the University of Zagreb. Before her position at the UN, she was Head of the Croatian Mission to the EU Ministry for European Integration; National Coordinator for the Central European Initiative; Minister Counselor at the UN in New York from 1992 to 1997; Department Head of the Republic Administration for Scientific and Technical International Cooperation; and Counselor for the Republic Committee for Education, Culture, Technical Culture and Sports.


Ambassador Mladineo informed the assembly that she was a charter member of a Rotary Club in Croatia, but that she had to resign due to professional relocation, but hopes to some day to rejoin.

When she was first assigned to the UN as a Counselor in 1992, her country was still in a state of crisis. Croatia had just ended a 12 years war and had just become a sovereign state. However, since that time, she noted that Croatia has made significant progress and has been a useful model for a number of countries transforming into a stable, market economy, and parliamentary democracy after emerging from war.

She emphasized that during the war, the UN and the International community were very effective in providing international peace keeping forces that were very much engaged in former Yugoslavia. In 1995, after the UN withdrawal, we were able to develop our own resources and develop our own country. “If it were not for the UN assistance, Croatia would not be where it is today”. This was especially true when there were with the 800,000 refugees or displaced persons due to the conflict.
She also noted that Croatia condemns all the war crimes and is committed to bringing the war criminals to justice, and supports the International Criminal Tribunal of the former Yugoslavia.

Currently, the Ambassador noted that European Union membership is essential to her country’s overall economic development that was initiated at the Zagreb Summit in November of 2000. Internal reforms to facilitate market based economic development, reorganization of state administration and full implementation of all European democratic standards is required before Croatia will be granted membership to the EU. These reforms also include the rule of law, guarantee of civil and religious freedoms, and complete equality of all our citizens. Achieving these reforms has transforms our country from a command based economy to an open, demand based market economy, Fortunately a high percentage of our citizens support the transformation, she highlighted.

It is our tourist industry is the most promising industry of Croatia with our beautiful shore line and of the 1400 islands.

It is the priority of the Croatia to build its international and security position based on NATO membership. Actively preparing for joining NATO, Croatia is ready to fulfill the obligations for membership.

In summary, The Ambassador noted that joining the European Union and transforming economic integration, solving of all open issues remaining after the breakup of ex-Yugoslavia, establishing good neighborly relations and co-operation with neighbor countries based on the principles of equality and reciprocity and the main issues facing her country now.
Posted by Tom at 2.1.06