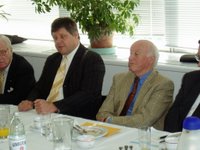 The guest speaker at the May 18th breakfast meeting was James Bone, the UN Correspondent for the Times of London. Mr. Bone received his degree in law from Cambridge, England and earned a Masters Degree in International Affairs and a second Masters Degree in Journalism at Columbia University. He manned the foreign desk in Rome and London before his current assignment. He also happens to be the neighbor of our own New York Rotarian and International breakfast-meeting coordinator, Joe Klee, on the eastern end of Long Island. He spoke about the immediate future of the United Nations in light of the Oil-For-Food scandal and the possible stalemate of the recently introduced "Larger Freedom" United Nations reform package.
James Bone, UN correspondent for the Times of London (left) and
Joe Klee Rotary Club of New York International Breakfast
Meeting coordinator and Deputy Director at the UN (retired) providing insight on the immediate future of the UN.
To start off the discussion, Mr. Bone recounted that in order to reduce the humanitarian hardship of the 1991 Gulf War trade embargo, the UN instituted an Oil-For-Food program in 1996, where Iraq could sell some of its of oil to finance food, medicine, and other humanitarian supplies purchases. All the revenue, (approximately $64 billion) from the sale of oil came back in food, clothing, medical supplies, and also paid for the weapons inspection. However, Saddam, a genius at being able to corrupt people, proudly devised a very clever scheme to allow influential politicians, officials, and journalists to benefit from the estimated 30 cents per barrel commission on hundreds of millions of barrels of oil. Mr. Bone assured us that he never received any of these lucrative offers from Saddam.
He pointed out that the Oil-For-Food scandal is hydra-like and very complex. In a nutshell, there are two main sides to the scandal: the oil sales and the humanitarian items purchases.
The first section, "Freedom From Want" outlines specific responsibilities as outlined in the Monterrey Agreement of March 2002 between the developed and developing countries. Mr. Annan is asking the political leaders of of developing economies to improve their governance and make space for civilized society (e.g., Rotary Clubs) and the private sector to play their full part. He is also asking for duty-free and quota-free market access to all exports from the least developed countries. And most importantly, the report asks that all developed countries commit themselves to spending 0.7 per cent of their gross domestic product on official development assistance.
The second section, titled "Freedom From Fear" is asking for member states to commit themselves to work together to deter terrorism, civil wars, deadly weapons proliferation and to establish a Peacebuilding Commission.
The third section, "Freedom to Live in Dignity" asks member-states to strengthen the rule of law, human rights and democracy.
Finally, the last section, "Strengthening the United Nations" is asking the Security Council membership to be more representative of the geopolitical realities of today. The report is also proposing that the Economic and Security Council play the leading role in implementing coherent United Nations policies on development. In addition, it recommends the creation of a new Human Rights Council to replace the discredited Commission on Human Rights.
Mr. Bone noted that there are many obstacles of the reform package. The expansion of the Security Council from 15 to 25 members proposes to give Germany, Japan, India, and Brazil permanent seats. Furthermore, the new permanent members would have the same responsibilities and obligations as the current permanent members, including veto power over council resolutions. UN is second only to the United States.) On other issues, such as a definition of terrorism, some Arab nations are starting to back away.
But any change requires 2/3 support from the 191 member-states, and cannot be vetoed by any of the five current members of the Security Council. Unfortunately, China has already taken firm position against Japanese membership in the security council. (Japan's financial support of the UN is second only to the United States.) On other issues, such as a definition of terrorism, some Arab nations are starting to back away.
As is normally the case in all organizations, there is a greater constituency to prevent change than for change to occur. As a result, it is unlikely that there will be major changes introduced at the summit in September in Mr. Bone’s opinion. The Peacebuilding proposal that would oversee post conflict areas has a good chance of passage, however.
Posted by Tom at 2.1.06