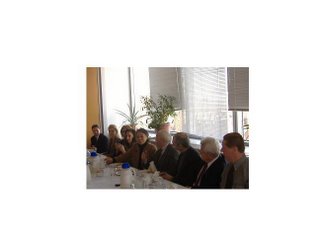 Momoyo Ise, 5th from left, is a former officer the Liaison Office of United Nations University in Tokyo, The UNU provides professional training as well as training in six languages. She also headed many UN Departments during her career at the United Nations. For the last eight years, since her retirement from the UN, and the Rotary Club of New York, Momoyo has worked with the Asian Women’s Fund in Tokyo.

The purpose of the Asian Peace and People’s Fund for Women (Asian Women’s Fund) is to make atonement from the Japanese people to the former “Comfort Women,” and to try to “solve today’s problems regarding women’s honor and dignity” by enlightening people, both in Japan and overseas, about the importance of protecting the honor and dignity of women, and by preventing such conduct against women in the future. The AWF promotes activities aimed at “building an international society in which such conduct shall never be repeated”.

"Wartime Comfort Women," refers to non-Japanese, Asian women who were forced to provide sexual services during World War II to the Japanese military. In 1990, a citizen of the Republic of Korea, and a former “comfort woman”, addressed the Japanese Government Assembly and demanded that Japan acknowledge responsibility. As a result, the Japanese government conducted two full-scale inquiries, in 1992 and 1993, that documented the involvement of the Japanese military in behavior that “…severely injured the honor and dignity of many women”.

As a result, for those forced to become comfort women, the Asian Women’s Fund (AWF) implemented a program to apologize and to display remorse of the Japanese people and acknowledged its moral responsibility. The AWF collected donations from Japanese citizens and financial resources from the Japanese government. The Fund compensated 285 former “comfort women” victims with two million yen (approximately $20,000) per victim that applied, and a letter of apology from the Japanese Prime Minister. While no individual victims from Indonesia or the Netherland came forward for compensation, the Japanese government has financed medical and welfare support projects for the elderly in these countries. The AWF first began implementing “projects of atonement” in the Philippines in August 1996, then in the Republic of Korea, and Taiwan.