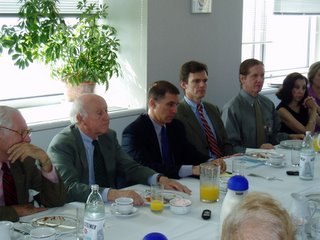 At the June 19, 2005 meeting of the Rotary Club of New York’s Breakfast meeting, Ambassador Daniel Carmon, Deputy Permanent Representative of Israel to the United Nations (3rd From left) spoke about UN Reform and Israel. Ambassador Carmon was born in Tel Aviv and attend schools in Jerusalem and Paris and serviced as a Paratrooper in the Israeli Defense Force. He was awarded a B.A. in International Affairs from Hebrew University in 1973. He started his career with the Ministry of Foreign Affairs and served in Washington and Argentina. 1996-2000 dept of Public Affairs Director and now Deputy Permanent Representative to the United Nations for Israel. He noted that he has had many contacts with Rotary over the years.

There was high hope when the State of Israel was established after World War II and entered the newly established UN. Membership in the UN promised democracy, equal representation and equality of rights for all members. However once the organization entered adolescence , the UN mechanism was being misused and Israel was being treated differently than other member states. He pointed out that “inside politics” allowed Israel to be denied its basic rights as a member of the organization.

He detailed some of the shortfalls of the current model. For example, the UN Charter gives every member the right to membership of the Security Council and membership is decided according to geographic distribution and council members are selected from the 5 geographical groupings. Geographically, Israel should belong to the Asian group. However, because of political differences with its neighbors, Israel was not accepted into the Asian Group. Therefore it had to be given indefinite, temporary, membership the Western Europe and Others Group (WEOG). As a result, for many years Israel could not be considered a candidate or nominated for any position.
He also pointed out the long list of UN resolutions concerning Israel every year. The current system allows voting-blocks to pass or reject any resolution, no mater how one-sided. He noted that there is no connection between the resolutions and diplomatic advances made. Every year the same 19 or so one-sided resolutions are introduced.
He also noted that, Emergency Special Sessions were primarily held on Israeli issues. It was also pointed out that over 25 percent condemnations issued by the Commission on Human Rights referred to Israel.
The Ambassador that he is only talking about the Middle-East. He is sure that the same inside politics is going on in the other regions. For example, in such recent genocides such as Rwanda, the Balkans, and the current situation in Sudan the UN has paralyzed itself and was unable to take any action.
There are, however, hopeful and symbolic events taking place. Dan Gillerman, the Permanent Representative of Israel to the UN was elected as the Vice President of the 60th UN General Assembly. The last Israeli elected to this post was Abba Eban in 1952. While Ambassador Gillerman is only one of twenty-one vice presidents, it was considered an historic and significant event in Israel. In addition, Israel is being considered for a position on the Security Council in 2018. Again, he emphasized, it is symbolic that we can be even been considered. Just a few years back, Israel would not have been able even to be proposed as a candidate. The Ambassador credits these advances with the help of its many friends in the UN such as many countries in Europe, the United States Canada and Australia.
Ambassador Carmon is very interested in reading the upcoming recommendations of the United States Congressional Committee on UN reform. Hopefully its recommendations will make the UN more effective in providing equal rights and representation to all its members.