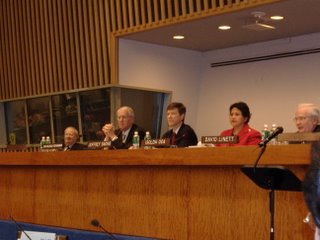 Professor Jeffrey Sachs, Special Advisor to the Secretary General and Director of the United Nations Millennium Project is also the Director of the Earth Institute at Columbia University and was listed as one of the one-hundred most influential leaders in the world by Time magazine. Also pictured are (from left) are Frank C. Collins Jr., President Carl-Wilhelm Stenhammar, Professor Jeffrey Sachs, Isolda Oca, and David Linett


He thanked Rotarians for their work and their one hundred years of service. “Rotarians stand for what all citizens need to be”, and when I gives speeches around the world, I always points out to other organizations Rotary’s Polio-Plus campaign as a model of public-private partnerships, he noted. Rotary International was the first of all organizations to understand the global mission that we have one world.

The Millennium Developmental Goals of 2000 are the world’s shared hopes and goals. Unfortunately, they are not on track. The MDG’s are the life and death struggle for the world. Twenty to thirty thousand men, women, and especially children die every day of extreme poverty. A $7.00 anti-malaria treated bed-net will last for 5 years and protect 2 children, yet 3 million will die from malaria “The goals are sensible and achievable yet they are still bold commitments. We still have a decade to put in the practical steps in even the poorest and the most seemingly hopeless parts of the planet. In the Polio-Plus program, “Rotarians did not say we are going to implement our life saving project in only parts of the planet and that some of the other countries are too poor, or hopeless, or too poorly governed to get the job done”. Needless to say, if the MDG are not achieved on schedule, it will be an embarrassment for all and “we will be a world without shared goals.”
He also emphasized that we need all of the goals to be achieved since poverty has to be defined in its entirety of income, hunger, gender equality, disease control, safe child birth, access to water and sanitation, and environmental sustainability.
The world leaders got it so right when they set the goals in 2000. “The definition of poverty is not one dollar a day; if there is no clinic, no roads, and no girls going to school what good is one dollar a day”.


Millennium Goal Villages require assistance to eliminate extreme poverty:
· Donated seed and fertilizer
· Treadle pumps for water
· Schools available for male and female children,
· School meals in the schools as an incentive to send their daughters as well as their sons to the schools
· Local clinic that is stocked with oral dehydration solutions, basic antibiotics for acute respiratory infections and anti-malaria drugs
· Bed-nets in every sleeping sight in malaria infected regions
· Help in transport and communication of people and cargo to reduce head-loading injuries.

To provide this assistance for self sufficiency, it will cost approximately $50 per person per year for several years to end extreme poverty in it’s entirety within a generation. The MDG’s want to half extreme poverty by 2015, but we could end extreme poverty by 2025, he said. Professor Sachs concluded his remarks by stating that he is grateful to Rotary International for its leadership to achieve the Millennium Development Goals because “the peace on the planet depends on them”.

Frank C. Collins Jr., Representative to the United Nations, the moderator of the panel thanked the speakers for their participation.


For more information go to or click http://www.earthinstitute.columbia.edu/about/director/
Posted by Tom at 21.1.06