Deputy Ambassador of the Russian Federation Speaks on UN Issues. 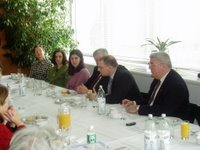 H.E. Mr. Konstantin Dolgov,the Deputy Ambassador of the Russian Federation, (2nd from left) was the guest speaker at the February 16th breakfast meeting. He presented an enlightening assessment of several of the notable issues facing today's United Nations.

He noted that since the end of the Cold War, the UN has successfully maintained stability in many areas of the world due to its peacekeeping operations. In his view, the UN is uniquely suited to remain as the international community's principal forum for peacekeeping and conflict resolution because of its unmatched universality, legitimacy, and organizational structure.
Currently there are approximately 70,000 UN personnel, serving in 17 peacekeeping operations. He noted that the 18th operation would commence within a few weeks once the UN begins assistance in the Sudan. The UN is also responsible to coordinate humanitarian assistance, social rehabilitation and institution building in many of these areas of conflict. The Russian Federation currently provides several hundred peacekeepers in several areas of conflict under the UN banner and expects to expand its contribution.
The Ambassador also made it apparent that the War on Terrorism, nuclear proliferation by non-governmental groups, as well as economic underdevelopment are all vital concerns that the UN will be effective.
He expounded that the UN in not capable of solving all global issues but that its most useful function is to act as “the” international hub and offer an organizational umbrella and the legal framework for the coalition of the willing. Above all, the UN is the only international forum that can authorize the use of military force on behalf of the international community.
He also spoke about Security Council reform, stressing that, contrary to popular opinion, the UN is not a supranational organization. Rather, it is an inter-governmental organization that can only achieve what the member states require it to accomplish. The UN’s efficacy is entirely in the hands of the member states.
.
Posted by Tom at 2.1.06